We’re back with the next installment of our staff spotlight series! The next interview is with Marly Valiente, an account executive in our New York City office.

Christian Hendricks: What are some exciting projects you’ve worked on at Fenton? 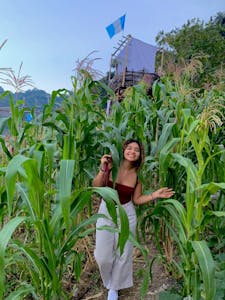 Marly Valiente: I think the most exciting project I’ve worked on at Fenton has been my work supporting the Vote Like a Madre campaign. The campaign urges Latina madres, abuelas, tías and madrinas to promise to vote for elected officials who have bold climate change plans. Latinas are among the most impacted by the effects of climate change, and as a Latina myself, I deeply resonate with the work being done to raise awareness for this issue and amplify Latina voices. Working alongside celebrities and influencers who also care about the climate crisis, like Eva Longoria, telenovela star Carlos Ponce, and many more, is also super exciting.

CH: Can you tell us about a particularly meaningful client outcome?

MV: Ever since my first days at Fenton, I’ve been working closely with the Annie E. Casey Foundation in support of its annual Kids Count Data Book release that showcases data related to child wellbeing across all 50 states. We media train Casey spokespeople to ensure they are prepared for any media interviews or radio tours. As part of this media training, I was asked with two days’ notice if I could lead the 10-minute Spanish-speaking portion of the media training.

While I was definitely out of my comfort zone, my colleague Stacey Arevalo was gracious enough to sit down with me, allow me to practice the portion, and gave me a pep talk before the media training.

But at the beginning of the media training, when my colleagues, Amanda, Taylor and I were about to start, it was requested that the entire media training be held in Spanish instead of the allotted 10 minutes. It was hard for all three of us to hide the sheer terror on our faces.

So I kicked off with what I had originally prepared and used both my knowledge from previous media trainings, coupled with my experience speaking Spanish at home to help translate, troubleshoot and provide sound recommendations to best support the client. And although the other people on the team aren’t Spanish speakers, they jumped in to support wherever they could.

Even under immense pressure, I was able to trust myself and my colleagues to persevere under the circumstances. No matter what, we were in it together.

CH: Tell us about a pivotal learning experience in your career.

MV: This is a hard one. I feel like I have learned so much here at Fenton, but one of my most recent learning experiences has actually been unlearning saying yes to everything. By practicing the art of saying no, I’ve learned that it’s more efficient to take on a smaller workload and give 100 percent than saying yes to everything and becoming overwhelmed or, worse, burnt out.

I’m also working on unlearning my imposter syndrome. That little voice in my head that tells me I’m not good enough, smart enough, eloquent enough, professional enough, experienced enough, and extroverted enough often looms over my head and takes over. But it’s important to remind myself that I’m in my current position because I AM capable, I AM worthy, and I AM deserving of all good things.

CH: What social causes are you passionate about?

MV: There are so many, but definitely racial justice, reproductive justice, ensuring equity in public education, transforming the criminal justice system, and tackling food insecurity.

CH: What’s something your clients don’t know about you?

MV: Although everyone at the agency knows I’m Fenton’s Resident Bad Bunny Fan, I usually don’t tell this to my clients. They probably have no idea that I’ve gone to three Bad Bunny concerts, one of which I traveled to Montreal, Canada for, within the past year.

I’m also an adrenaline junkie and have skydived, climbed a skyscraper in New York City, and next on my list is bungee jumping.

CH: How do you like to spend your time outside of work?

MV: Some of my favorite things to do include trying new things, whether that’s traveling to new places, eating foods I’ve never tried before, or going on a “side quest” that’s outside of my normal routine. I also enjoy spending quality time with my friends and family and typically go to the gym most days. On a more relaxed day, you can always find me catching up on my favorite show or anime.

CH: What’s one of your social media must-follows?

MV: I’ve been following Bretman Rock for so long that I feel like we grew up together — we’re actually the same age. From Bretman’s makeup artist days to his science experiment phase to hosting his own show on MTV, it’s amazing to see the evolution of an influencer and his path to becoming mainstream. His TikTok handle is @bretmanrock, and his YouTube channel is Bretman Rock.

CH: What tips do you have for first-generation Latinos/as in navigating the workplace for the first time?

MV: I think for a lot of us, we are paving the way not only for ourselves but for our entire families. While this is a huge feat in and of itself, it can take a toll on us, both mentally and emotionally. When we finally are able to reach a level playing field and enter the workforce as what our parents and grandparents would call a “professional” job, it’s easy to feel like we are still way behind everyone else. From things as small as learning corporate jargon to things as large as learning to negotiate and advocate for yourself, it’s easy to feel lost when these are things you’ve never been taught before.

With that being said, I strongly recommend connecting with as many people as you can at your workplace and then finding your tribe – you can learn so much from your colleagues and finding people at your workplace that you can instantly click with can make a huge difference on a bad day. Having people in your corner can make the tough times ride a little smoother, and they can teach you the things you were never taught growing up.

Also, it’s important to give yourself some grace – you’ve already done so much to get to where you are now, despite all the odds stacked against you. Sometimes we need to take a step back and give ourselves some reassurance. Remember that when you win, the people of your community win, too.

Four Ways You Can Join the UN General Assembly