In honor of Latinx Heritage Month, Account Executive Celeste Rojas wrote about what being a descendant of an indigenous Oaxacan community means to her.

I can’t imagine a childhood without Zapoteco. I heard it most on Sunday afternoons when my aunts visited my Tita (grandmother) to chat over some cafe de olla and pan de yema from their pueblo.

Home to Tita and my aunts is Solaga, a pueblo located in the mountain peaks of Oaxaca, Mexico. When Tita was nineteen, she migrated to the United States to build a new life in Los Angeles with my grandfather, bringing only my 3-year-old mother, her native tongue, and a slither of Spanish. 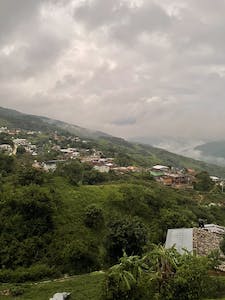 Regardless of where Tita relocated, Zapoteco was always spoken around our house. Learning Zapoteco is not easy, but the language has created meaning, values, and practices that will forever be rooted in my identity.

Migration for indigenous migrants like my Tita meant having to uproot from their ancestral lands for economic opportunity without knowing what to expect from an unknown country. And still, after they crossed borders, they faced discrimination and displacement, whether in Los Angeles or in Oaxaca.

Tita has told me about her first memories of racism in Mexico City because she was a dark-skinned indigenous woman from a village who didn’t speak Spanish. In the U.S, racial slurs like “Oaxaquita” (little indigenous woman) or jokes about Oaxacan food were a common occurrence from other Mexican people, which made it difficult to find a safe space in Latinx communities since being indigenous was the one thing Tita couldn’t be. Discrimination against indigenous migrants existed everywhere, and there came a time when speaking Zapoteco stayed at home or away from public spaces. But like so many indigenous people have done in the past, migrants like my Tita brought their culture, language, and resilience ready to plant in new soil.

I am grateful to experience the fruits of their migration because of the access I have to connect to my ancestral inheritance through dance, food, music, medicine, and one day, language. I am also privileged to have the choice to migrate back to Solaga, Tita’s pueblo and get to know my family’s native lands at a personal level. 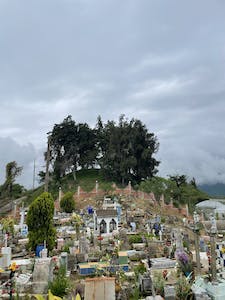 This past July, I went to Solaga for the first time in my life and it was an experience the little girl in me didn’t know she needed. I met more aunts and family, ate all the quesillo I wanted, and danced jarabes (traditional dance) all day, surrounded by clouds, mountains, and neighboring pueblos. But most importantly, I was finally able to meet Tita’s stomping grounds.

The river she would play in as a kid and the tree she planted above the pueblo’s graveyard was finally in front of me. I left Solaga feeling loved, cared for, and held by my community, unable to comprehend how painful it must have been for my family to have to separate from such a beautiful place. 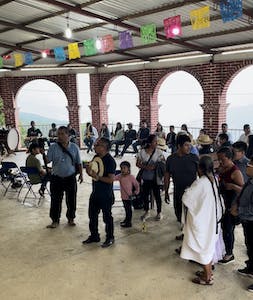 Tita’s sacrifices are a reminder to advocate for a world where indigenous identity is not a target of exploitation and their communities feel liberated to honor their traditions and speak their languages in any space.

My identity inspires me to tell stories that center humanity and address injustices on communities often silenced – and this is what I bring to work at Fenton every day. This passion of mine will forever be a tribute to being a product of indigenous survival.

Embracing a DEI Recipe for Progress