Standing Up for Kids in NYC

Citizens' Committee for Children (CCC) was founded to tackle the complex challenges children face in New York City. In 2018, Fenton partnered with CCC and its coalition, Campaign for Children, to address one problem in particular: the salary disparity among early childhood educators. 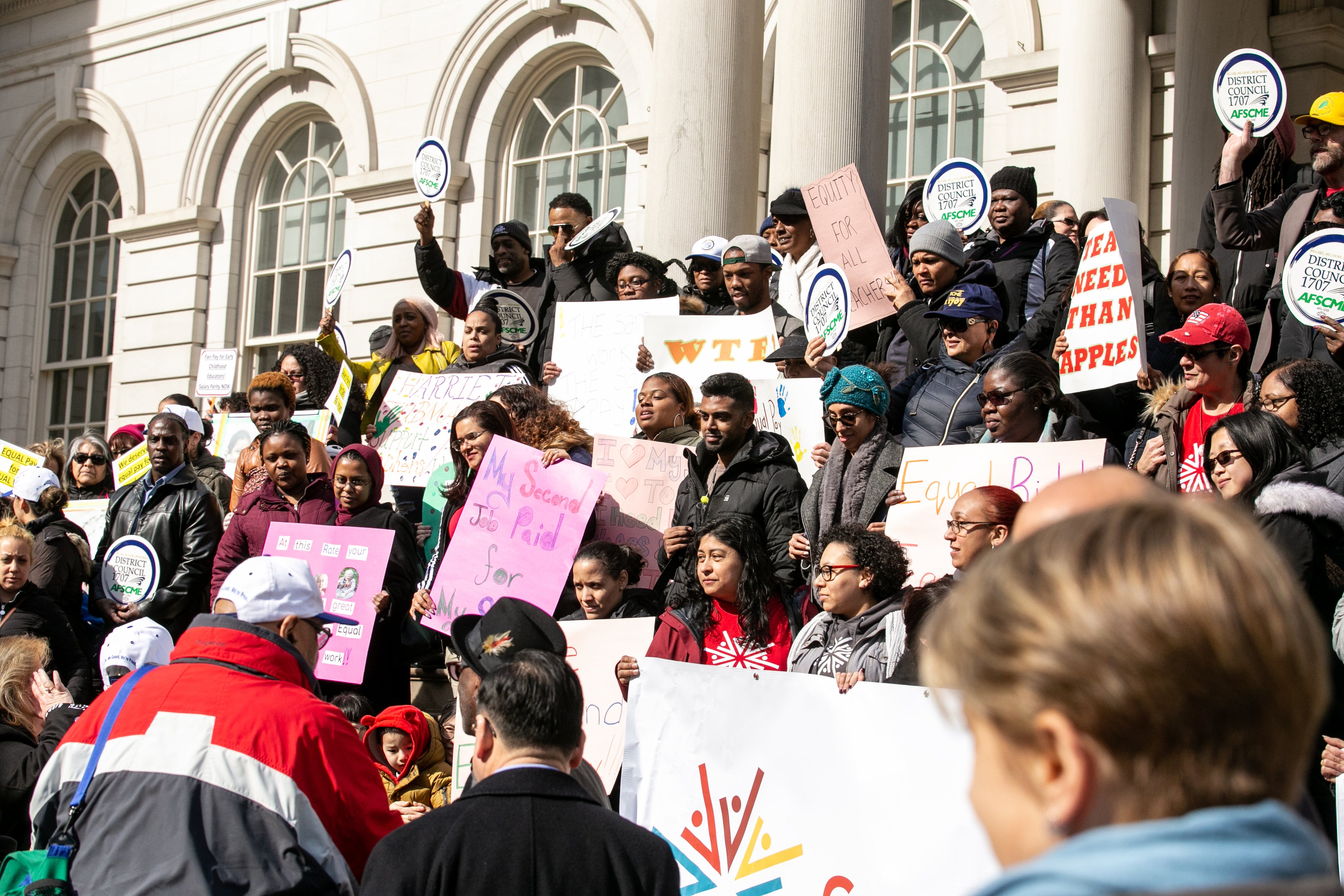 The problems our kids face — in New York City and across the country — are complex, diverse and growing. From an inadequate public school system to an epidemic of community homelessness, to increasing rates of concentrated poverty, this generation of children has a lot to battle.

Citizens’ Committee for Children (CCC) of New York was founded on a mission to tackle these challenges, with the understanding that they are all interconnected. In 2018, CCC asked Fenton to help them and its coalition, Campaign for Children (C4C), with one issue in particular: the salary disparity among early childhood educators that was undermining New York City’s universal pre-K program.

Universal pre-K was Mayor De Blasio’s signature initiative, and CCC had joined other local and national progressives in rallying around its idealistic ambition — to give young New Yorkers a fair start in the public education system.

Achieving this reality required a new vision and a number of dedicated partners, including educators from New York City’s Department of Education (DOE) as well as those from Community-Based Organizations (CBOs).

CBOs are distinct from traditional K-12 DOE schools. Teachers in these programs work longer days and throughout the summer months, in some of the highest poverty neighborhoods. In New York City, CBO teachers serve 60 percent of all pre-K students.

Despite doing the same kind of work, and often more of it, with the exact same credentials and education, CBO teachers were receiving up to 60 percent less pay than their DOE counterparts due to inadequate funding.

This was a huge equity problem especially since CBO teachers are disproportionately women of color.

Fenton was tasked with using strategic communications to raise awareness on salary parity and petition to equalize salaries for these educators in the FY 2019 NYC budget. 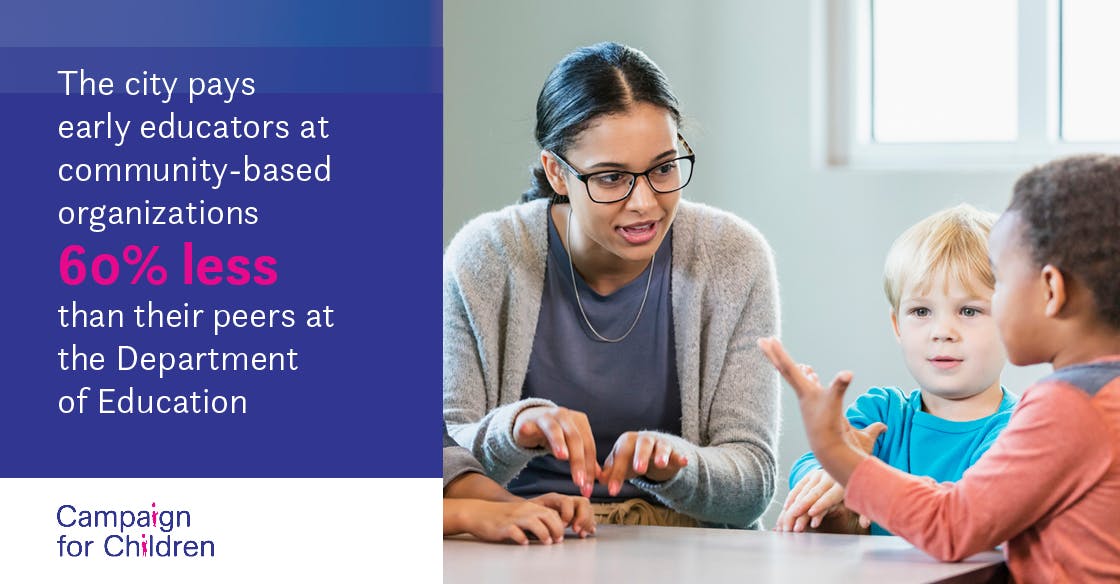 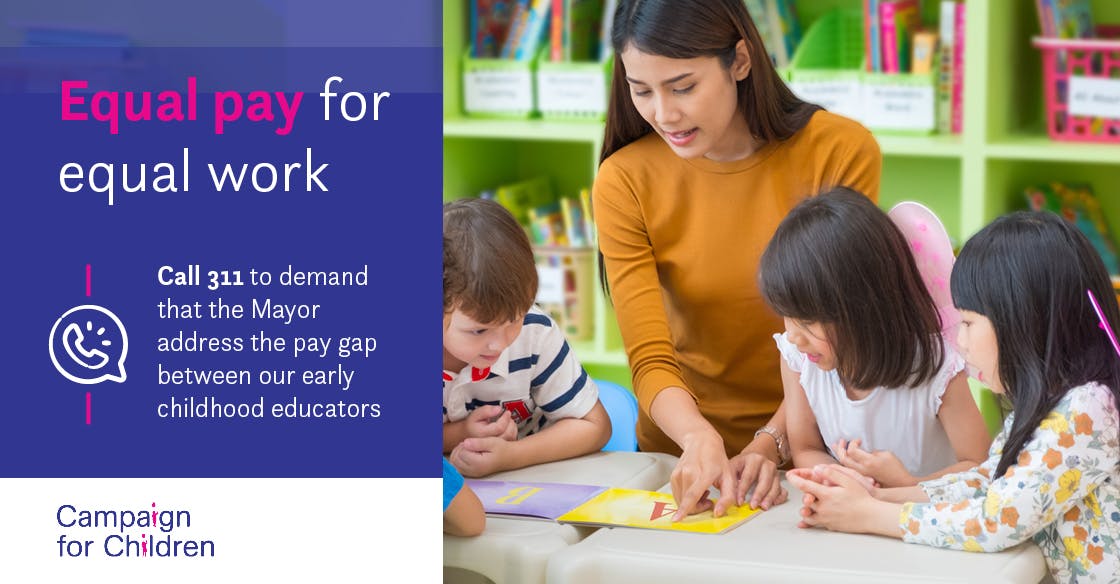 In February 2019, the city announced pay raises for pre-K teachers across DOEs and CBOs. But the raises were packaged in a complex request-for-proposal (RFP) from Mayor De Blasio. The RFP would have folded CBOs into the DOE umbrella, which was uncontroversial, but it still denied parity to CBO educators and squeezed their capacities.

At that moment, Fenton made sure that the gloss-over wouldn’t erase New Yorkers’ memory of the underlying inequity, helping to place critical pieces drawing attention to salary disparity in local outlets like City Limits and Chalkbeat. Fenton also got this campaign on the social good community’s radar, through placements in outlets like New York Nonprofit Media and on local television stations like Pix 11.

When CBO teachers upped the ante in the months that followed — waging a strike that could disrupt the pre-K system — Fenton used this as an opportunity to bring even more attention to the issue and secured placements in WNYC and The Wall Street Journal.

Fenton helped CCC escalate things further in May 2019, when Mayor De Blasio announced his intentions to run for President of the United States. De Blasio’s early childhood education program was a cornerstone of his campaign — Fenton used the spotlight to poke critical holes in the credibility of his account. For any progressive to boast of a free, universal pre-K program in the national eye, Fenton and CCC argued, that program would need to in fact be genuinely equitable.

The issue was gaining traction in the public conversation. To build the political pressure, Fenton encouraged CCC to take a new step, drafting an open letter protesting the Mayor’s unwillingness to use his power to change what was clearly unjust. As De Blasio toured media outlets promoting his candidacy, Fenton hit the war room, relentlessly targeting reporters and anchors with the truth about his record on salary parity for pre-K educators. 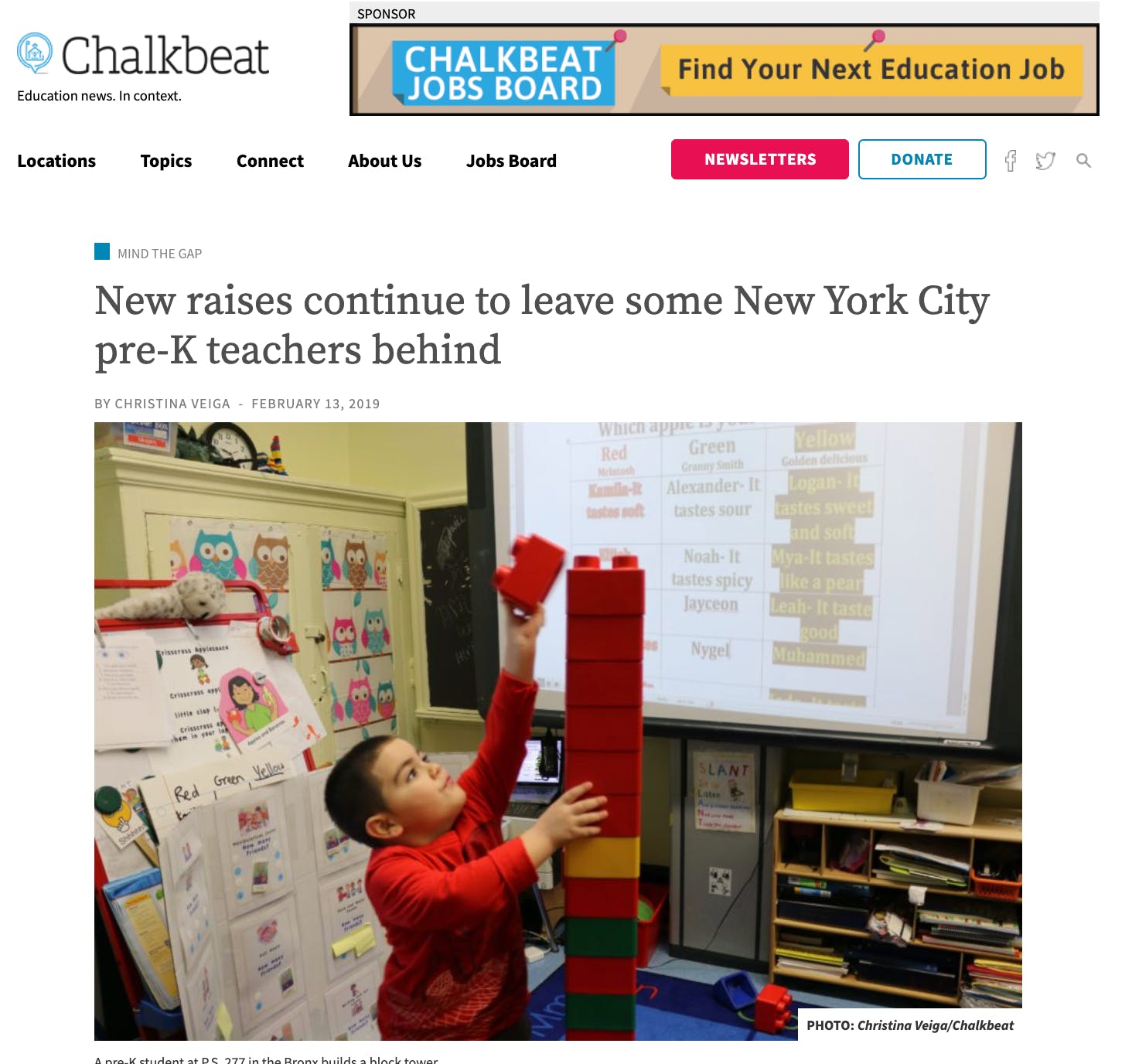 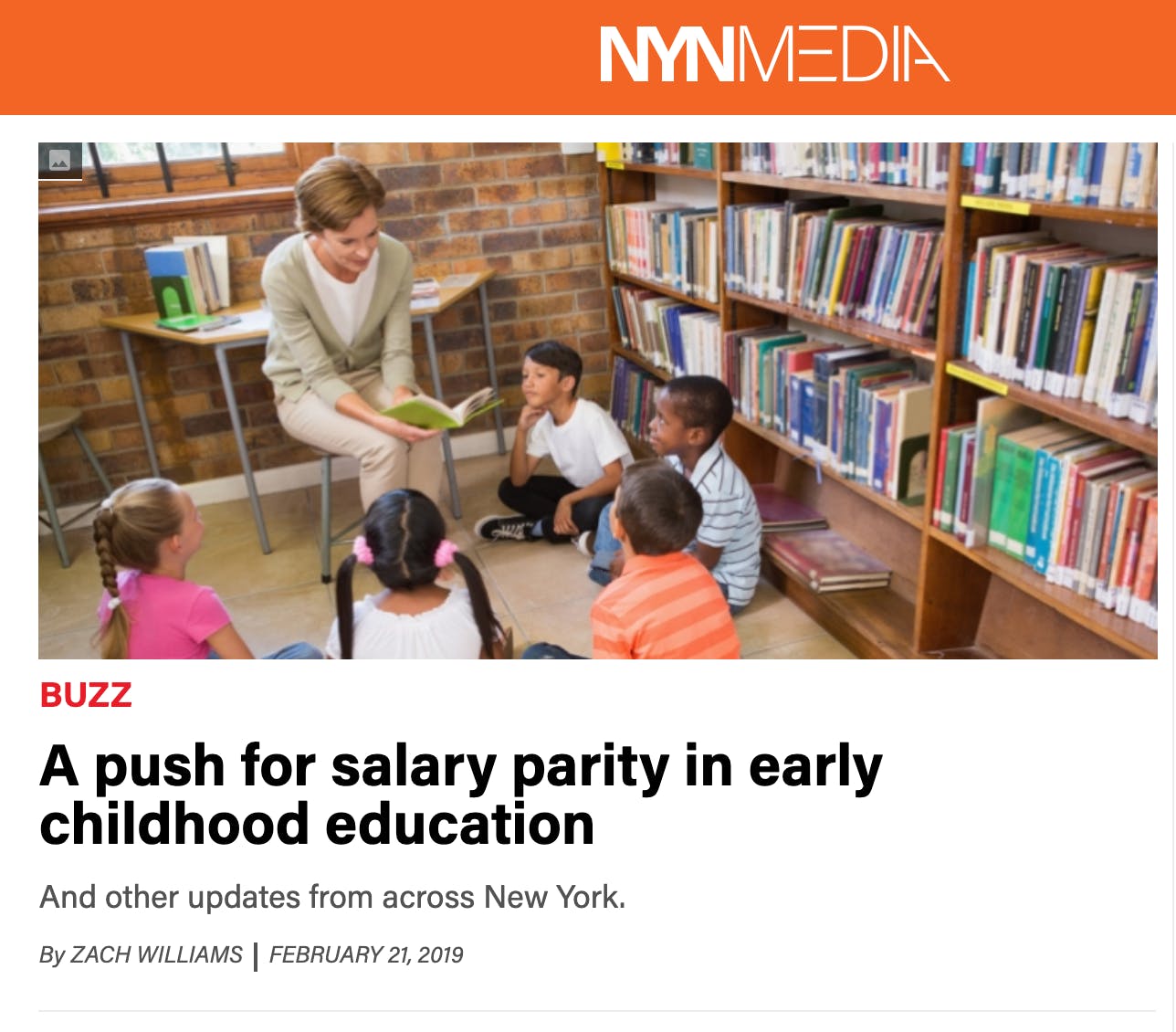 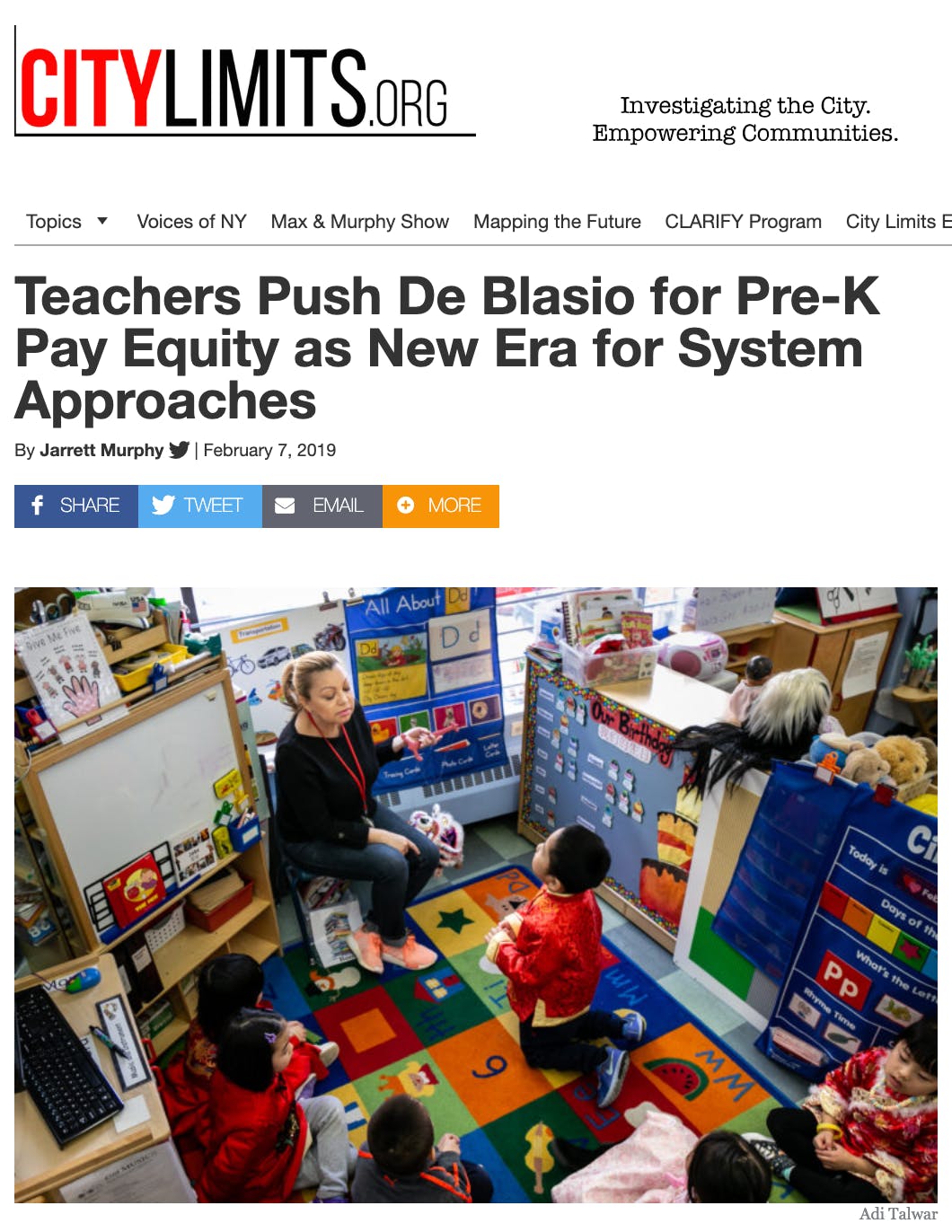 Finally, the months-long campaign came to fruition. With the Mayor weakened by CCC and C4C’s criticisms — publicly and relentlessly broadcast per Fenton’s strategy and implementation — he decided to change his mind.

The week of July 9, De Blasio struck a deal with CBO educators’ unions to finally give them equal compensation for equal or greater labor, closing the salary gap over a three-year transition period.

As CCC Executive Director Jennifer March told the press that week, CCC’s campaign, with Fenton’s guidance, had won a tremendous victory, “providing the CBO workforce with the fairness and respect they have earned.”