How would you feel if your employer or university was able to dictate your medical decisions? That would feel invasive, right?

Well, that’s exactly what just happened. Yesterday the Supreme Court of the United States sided with the Trump administration, ruling that your employer or university can claim religious or moral objections to deny you birth control coverage. Basically, your boss can determine your access to reproductive health care. Because of this decision, between 70,500 to 126,400 women will immediately lose access to no-copay contraception, many of those being young, Black, Latinx or low-income.

It is disturbing to think about the amount of power the Court has just given employers and universities to control the medical decisions of individuals, especially when it’s something as personal as family planning. 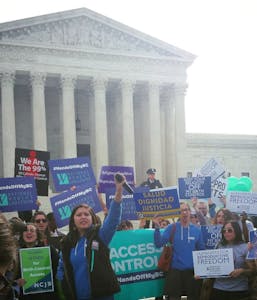 Thanks Birth Control 💕 (and the Affordable Care Act)

The truth is, birth control is widely used and effective in reducing unintended pregnancies. In the United States, more than 99 percent of sexually-active women have used birth control at some point in their life and some 60 percent are currently using birth control. Thanks to birth control, so many people, including myself, have been able to determine the paths of their lives in a way that suits them best.

Birth control reduces not only unintended pregnancies but miscarriages, abortions, child mortality and maternal mortality. While there is nothing wrong with taking birth control solely to avoid pregnancy, we know that many people take birth control for conditions such as polycystic ovarian syndrome, hormonal acne, migraines, and it can reduce the risk of uterine cancer, ovarian cysts, and anemia.

Birth control is essential reproductive health care that has benefited not only those who use it but society at large. A poll found that nearly 75 percent of voters believe that access to affordable birth control affects a family’s financial situation and is vital for women’s equality. Unfortunately, regardless of all the good that birth control has brought us, it is still under attack and we must continue to fight for control of our medical decisions and our bodies.

The Reality of the Anti-Choice Movement

I was in college (and on The Pill) when Rush Limbaugh called Sandra Fluke a “slut” and a “prostitute” for advocating for access to birth control. It reminded me of all the times I heard men, that would never be able to get pregnant or have to deal with the stigma of having pre-marital sex, harshly judge and ridicule women for using birth control. I always find myself thinking: “Why is birth control always under attack if it is so commonly used?”

The answer was obvious: the anti-choice movement’s intentions were never based in concern for women’s health or lives, it’s always been about upholding “values” rooted in misogyny and white supremacy that reinforces that control over bodies of people who are capable of getting pregnant.

From Hobby Lobby to the countless medically unnecessary abortion restrictions (that are ineffective in reducing abortion) to attempts to repeal the ACA to favoring sex education that is abstinence-only (also ineffective and harmful), this is not just a concerted effort but recursive and widespread. By punishing adults for personal decisions, whether it’s denying them birth control or even abortion, they are causing harm and suffering. As always with this administration and with the anti-choice movement, the cruelty is the point.

A Call for Reproductive Justice

If we truly want to fight back against the anti-choice movement, we need to fight for not only reproductive rights such as birth control and abortion but reproductive justice.

Reproductive justice is a framework, developed by Black women who felt excluded from the mainstream reproductive rights movement, takes into account the social, political and economic issues that determine whether or not someone chooses to start or not start a family.

Reproductive justice addresses the reality of inequalities in our society to access and affordability when it comes to having a child or having an abortion or simply just using birth control on your choice. This means that access to healthy food, stable housing, quality education, and economic security are all factors that impact an individual’s reproductive choices.

The reason we need to fight for reproductive justice harder than ever is because of this persistent and concerted effort from the anti-choice movement. Reproductive justice advocates are fighting so that people can create families in environments that are healthy and safe. That means we’re fighting for abortion access, birth control access, expanding access to pre-natal and post-natal care, child care, equitable education, universal healthcare, supporting pregnant and parenting youth, paid parental leave, ending mass incarceration and immigration detention, and so many more policies that are for good for families and our communities.

Yesterday’s ruling from the Supreme Court is not surprising, but it’s still devastating. The anti-choice movement sees today’s ruling as a victory, but the truth is, pregnant people will potentially die, people who need access to this medicine will suffer — and there’s nothing “pro-life” about that.