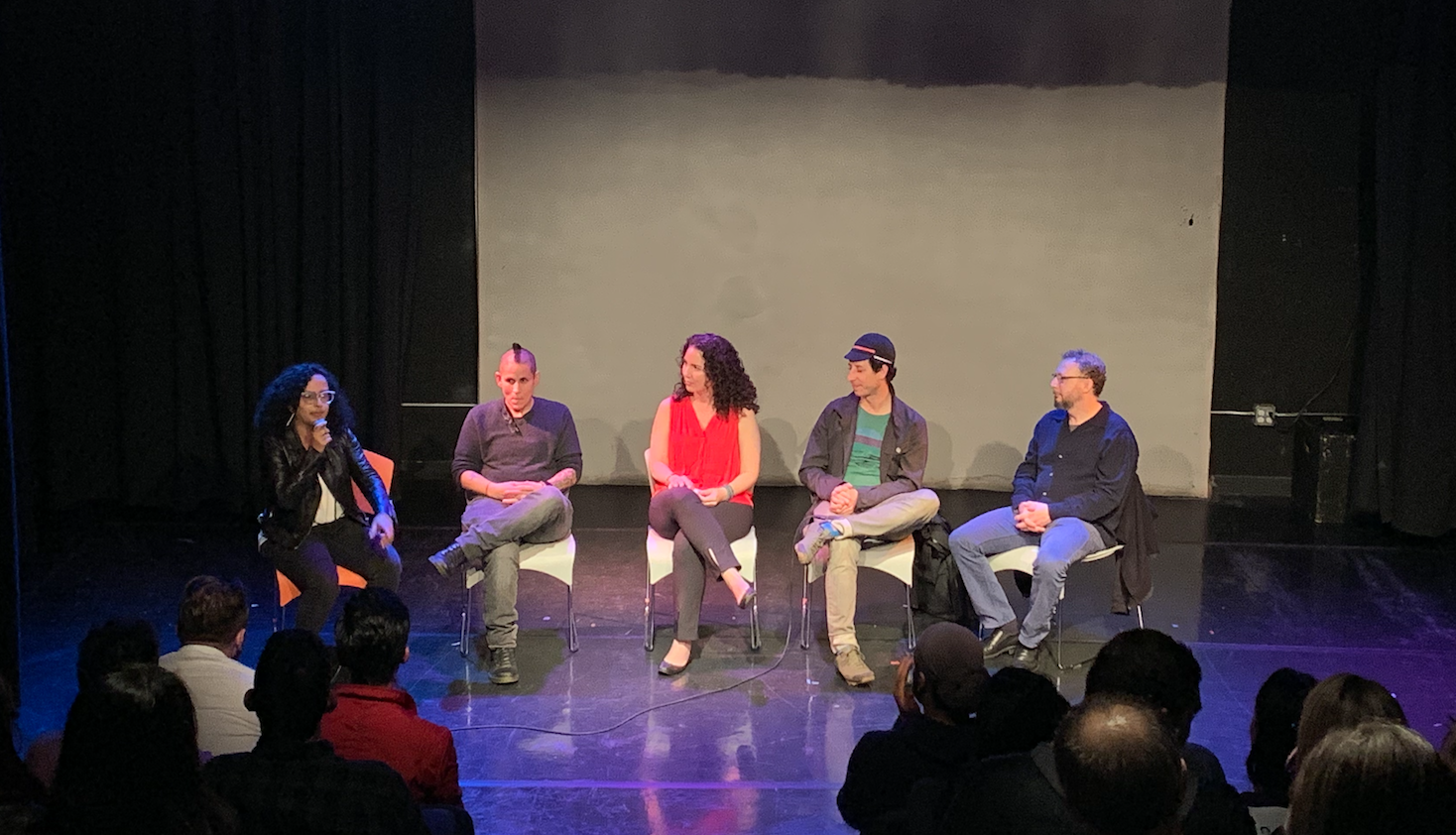 GLIDE is a leading social service organization, a social justice movement and a spiritual community that has served vulnerable communities in San Francisco for nearly 60 years. They provide services to meet basic needs, stabilize lives, create pathways out of poverty and work for systemic change. The GLIDE Legacy Committee, a group of young professionals in support of GLIDE’s mission, created a social justice film festival to feature moving stories that embody the organization’s mission and values, rooted in empathy, inclusion and transformation.

Fenton first attended the GLIDE Legacy Social Justice Film Festival last summer. We were inspired by the stories and individuals featured as well as the filmmakers themselves, and knew there was a strong alignment between our organizations. As a social change communications agency in San Francisco, we understand how powerful storytelling can be for change and how critical and transformative GLIDE’s work is in our community. After meeting with members of the committee to better understand the issues addressed in their latest films and how we might support their team, we sponsored the winter film festival and conducted an in-person communications training for the Legacy Committee. That all happened in February and March of this year, before social distancing was in place.

Now, the GLIDE Legacy Committee is back with a new set of films for their upcoming Social Justice Film Festival on Thursday, July 23. This time, the festival is virtual, so audiences from around the country can attend (you can buy tickets here). Proceeds go to GLIDE to help serve San Francisco’s most in need, which is especially critical amidst this global pandemic.

Leading up to the event, we had the opportunity to catch up with the film festival’s founder, Nicole Foley, a filmmaker and creative strategist, to hear more about the festival and what’s coming up next for her and for GLIDE. Read on for the full Q&A interview.

What is the “GLIDE Legacy Committee Presents: A Social Justice Film Festival”?

The Social Justice Film Festival is a celebration of GLIDE’s values and message, which are rooted in empathy, inclusion and transformation. The Legacy Committee, a group of young professionals in support of GLIDE’s mission, presents moving stories that embody the vision of GLIDE, which is to create a radically inclusive, just and loving community mobilized to alleviate suffering and break the cycles of poverty and marginalization.

Why did you decide to start a film festival?

When I joined the GLIDE Legacy Committee in January 2018, we were exploring ways to broaden our audience and engage them beyond our annual gala. The film festival was a knee-jerk reaction for me because I’m obsessed with social justice documentaries. I’m amazed at how a short film can not only educate me on an unfamiliar topic but also get me to care enough to do something about it. My favorite example of this is a short film, “Fix and Release,” about a turtle trauma center outside of Toronto. If someone told me about this place, I would have found it interesting, but I doubt it would have moved me to do anything about it. Watching a 15-minute documentary about how this clinic rehabilitates injured turtles invested me emotionally, and I donated money to this center. That’s the power of compelling storytelling. Our festival exposes our audience to social justice issues that may or may not be familiar to them. After four sold-out festivals, we have found that the stories resonate and inspire people to take action on these issues. Audience members even requested that we add the filmmakers’ calls to action to the printed programs, and our last show resulted in 20 people signing up for volunteer shifts at GLIDE.

You’re also a documentary filmmaker yourself! What inspired you to create “Couper Was Here,” and why did you want to draw attention to the homelessness crisis?

In 2016, I read an open-letter to then-Mayor Lee and the Chief of Police by a relatively new San Francisco resident about the inconvenience of having to see unhoused people on his way to and from work. His post received over 10,000 positive reactions. I had been feeling the ethos of intolerance growing, but this was the first time it was so overt and concrete. It infuriated me because I happen to know and care about some folks who are currently experiencing homelessness. I decided that the only way to challenge this thinking was to add some humanity to the issue. I reached out to the Coalition on Homelessness and offered my services. They wanted a video, “Vote No on Prop Q,” for the 2016 election. Prop Q had the misleading title, “Housing, Not Tents,” but there was no housing in the measure, and it was not a viable solution. In the process of making that video, I met Couper and knew immediately that I wanted to do a larger project with her. “Couper Was Here” was released in April 2019, and audience members from various festivals shared with me that they won’t see the issue of homelessness the same again. I wanted the film to challenge minds on this issue and to inspire compassion for people dealing with this very difficult reality.

The GLIDE Legacy Social Justice Film Festival has evolved from a one-time event to an ongoing biannual event series, featuring different films and filmmakers. What drove that evolution?

With the standing room only success of our first film festival, we saw that there was quite an appetite for short-form social justice content and this type of event. Since then, we offer a new program each July, which consists of five documentary shorts and repeat it at the beginning of the following year. Part of the curation process involves choosing films that cover issues that GLIDE addresses with their services. We make sure each program covers a variety of topics, and we search for films that celebrate the resilience of the human spirit. Every festival has sold out, and that inspires us to keep going!

What films are going to be featured in the next event on July 23?

On Superbowl Sunday, I watched the Oscar-nominated documentary shorts with a GLIDE Legacy Committee alum, Kevin Pong. We were both blown away by “St. Louis Superman,” a story about Bruce Franks Jr., a Ferguson activist and battle rapper who was elected to the overwhelmingly white and Republican Missouri House of Representatives. I turned to Kevin, and said, “I don’t know how I’m going to pull this off, but we’re screening this film at the next festival!” Stars aligned, and it turned out that the Legacy Committee Co-Chair, Chris Dowd, is friends with one of the directors, Sami Khan. Little did we know how timely this film would be for our July 2020 program. Given all of the lessons this year is relentlessly presenting, our July festival is particularly strong and poignant. Another Legacy Committee alum, Brenton Gieser, filmed “Memorialize,” which features a local pastor in San Francisco’s Tenderloin, who is on a mission to honor the lives of those expected to be forgotten. Elivia Shaw’s “The Clinic” follows Dr. Marc Lasher and a group of volunteers who provide free medical care and clean needles to IV drug users in Fresno, California. Tasha Van Zandt’s “One Thousand Stories: The Making of a Mural” celebrates every walk of life in San Francisco. And Rodrigo Reyes’s “Abuelos” shows how families fight to stay connected in the face of huge systemic challenges. Each of these stories inspires empathy, compassion and resilience, which is what we need to weather a particularly dark moment in our country’s history, with a global pandemic, racial injustice, health inequities and a severe economic downturn. You can learn more about each of the films and buy tickets for the event here.

As a social change communications agency with an office in San Francisco, it was important for us to support the film festival and GLIDE. Are there ways other organizations can support this work?

I want to thank Fenton again for sponsoring the February 2020 film festival! Fenton’s sponsorship allowed the Legacy Committee to offer all of the festival’s proceeds to GLIDE programs and services, which have continued to serve the most marginalized in our community during a global pandemic! We are absolutely interested in future sponsorships and in partnering with companies and organizations that value the tremendous work GLIDE is doing in San Francisco. Feel free to contact me or one of the Co-Chairs, Paloma Figueroa and Chris Dowd, for more information at youngprofessionals@glide.org.

It was truly an honor to be a part of this and we are happy to hear there are more opportunities for future partnerships. What’s next for you on the social impact and storytelling front?

I just finished teaching my pilot class, “Video for Social Impact,” which is a 6-week course aimed at making video content creation as accessible as possible. I really believe we all have compelling stories within us, and they just need to be chiselled out. We cover the basics of storytelling, and some strategies on how to shape a piece into a social impact video. I could see that many people were intimidated by creating videos because of cost and lack of deep expertise. These days, most people have smartphones with good cameras, and I’m convinced we’ll be seeing more and more mobile filmmaking in feature-length narrative and documentary films. The course offers basic editing instruction on a free version of professional-grade software, DaVinci Resolve. I am on a mission to remove any barriers to create social impact content. I loved teaching this class, and the next one begins on Wednesday, August 5th. Learn more here.