As esteemed social media guru Brian Solis observed in a recent opus on the “coming of age” of Twitter, “While we may have freedom of Tweet, we are also witnessing that in some cases, common sense is not so common after all.”

We find that many clients approach their Twitter strategy like an alien spaceship, and perhaps that’s a fault of the hype surrounding the platform. But in all honesty, the rules that govern Twitter do not differ that much from the rules that govern headline writing or, for that matter, common sense tactics of traditional media.

But to help simplify the craft of tweeting (Tweetcraft?), here are the basic building blocks of a good tweet. Note of caution: all this advice comes with a huge asterisk, which we will address at the end.

Explicit: Do you typically click on a link with no idea where it leads to and no explanation as to why you should click on it in the first place? Yeah, we didn’t think so, which is why rule #1 is always provide context for your tweet. At the very least, denote what lies at the other end of the link. This concept may seem simple, but we’ve come across plenty of Twitter accounts that post links without any text, or the text that is provided tells us nothing about the content or context of the link. You can’t rely on sheer curiosity to drive those clickthroughs, and typing “Check out this funny video” won’t cut it. For example of a tweet that’s nailed it on the head, refer to @GatesFoundation’s below: 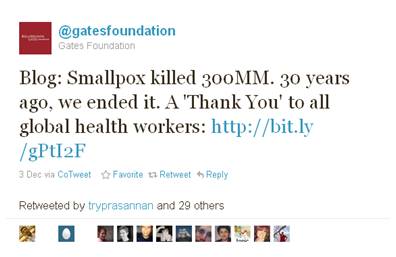 Concise: Just because you can use 140 characters doesn’t mean you should. In general, it’s good practice to leave enough space for someone to retweet using the older “RT @username” convention. And if you’re feeling up for a challenge, try to leave enough space for others to comment during their retweet. As it is with headline writing, get your point across with as few words as possible (but use functional abbreviations, such as “2” for “to,” only in the most dire of circumstances). See @ONECampaign’s below for an exemplary tweet that is not only explicit and humorous, but leaves a retweeter 40 characters of space to work with. 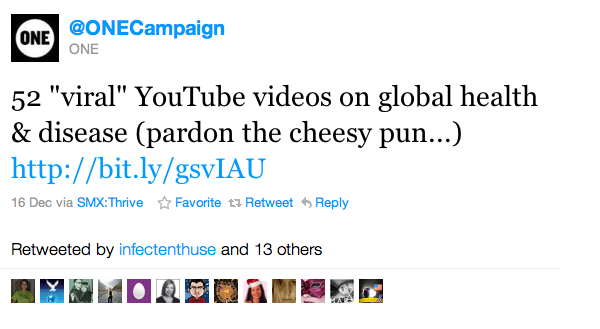 Furthermore, having space is not a license to bog down the end of a tweet with hashtags. They should be included sparingly and considerately. A tweet where half the words are hotlinked is hard to read and oftentimes confusing as many hashtags are abbreviations that don’t have clear meanings.

Eye-catching: In the same fashion that journalism students are taught to write in inverted pyramid style and lead with a hook, good tweeters know to front load the beginning of a tweet with eye-catching words and capture the meatiest parts of the story. Consider the strong, opinionated language New York Times columnist Nicholas Kristof uses in the tweet below:
From the outset, the word “appalling” grabs the reader’s attention. Kristof then deftly boils down the Washington Post article to its main point, guaranteed to rile his followers. A tweet that caters to an emotional response and promises compelling content is a sure win. 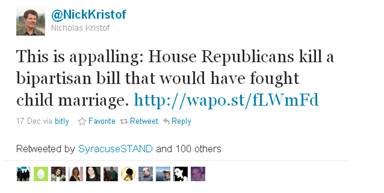 Shareable: The factors that make a tweet shareable can vary greatly based on the audience you are trying to engage. Therefore, before you do any tweeting of your own, it is imperative to understand the tone of the existing conversation. Study peer Twitter accounts and compare how certain tweets are shared more than others. Compile and analyze for trends. For example, working in the reproductive rights field, we found that stark facts and witty, snarky comparisons were retweeted more often. With a green consumer product, we capitalized on the creativity and giveaway mentality of many mommy bloggers by hosting naming contests. As a general note, first-person tweets typically aren’t as shareable, since it would look like the retweeter is taking your words as his/her own.

*The “At Your Risk” Asterisk: One of the dangers of writing Twitter advice is people taking it too much to heart. No social media guide should be treated as a strict order of operations, nor should one ever be marketed as such. A wonderful aspect of Nick Kristof’s Twitter account is that he peppers his feed with lighthearted observations that does use plenty of first-person. A tweet that doesn’t get retweeted is not necessarily a failure. Even though first-person tweets don’t get shared as much, it shows that there is an individual behind the information flow — a uniquely human voice. If you followed the above five rules to a T, that facet of your Twitter account would never come through.

Therefore, our advice here should serve as a guide not as strict criteria; every update should not be run through a crucible of robotic explicitness, conciseness, shareability etc. To be human is to inject variation into one’s tweets, to experiment. So to close with another gem of Solis’ piece: “It is we who make Twitter so unique and consequential by simply being human and sharing what we see, feel, and think – in Twitter time.”

Lisa Witter on Appealing to Women Differently Than Men