I had the pleasure of presenting a rich and thought-provoking discussion around ‘moving from corporate responsibility to corporate action’ to the 3BL Association – an organization convening leaders and building peer-to-peer collaboration in CR and sustainability yesterday.  If you missed the presentation, here are the important points of the discussion.  Enjoy. 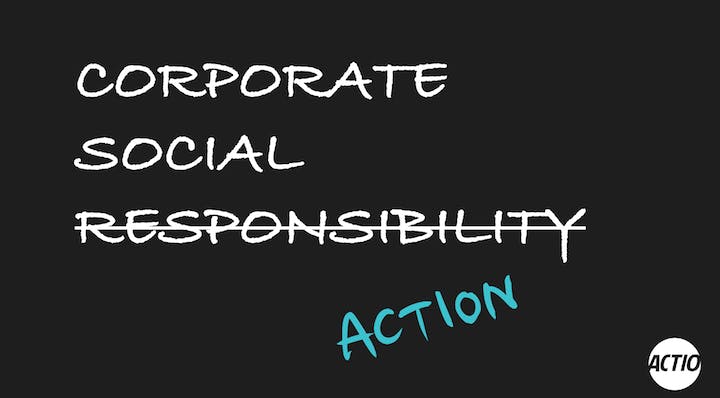 The corporate responsibility movement has grown out of the widespread skepticism and discontent with past corporate behavior.  In fact, in addition to the broad scandals of corporate abuse symbolized by the Enron case, it could be argued that business had been given tacit permission to transcend the moral code.  Today, pressures are being exerted by civil society, organized groups, and socially responsible investors. They have rallied and forced corporations to address things like inequity in pay scales, transparency,  sustainability, human rights, and labor practices.

Quickly these pressures spawned “best practices” in CSR – diversity programs; transparency initiatives and other efforts to share more performance data; environmental reports; social reports, and others.  But, such responses appear to have been too shallow when they were forced and not terribly distinctive.  Patching up the vulnerable parts of a company with a topical program is not the sign of an authentically integrated corporate citizen. Nor is philanthropy, per se, or so-called “cause-related marketing.”  What’s been missing for true credibility is consistent proof of authenticity.  And that comes from an understanding of the motives behind the company’s response to pressures and seeing those motives demonstrated in actions and a consistent presence of a set of values in all its decision-making.

This couldn’t be more important today as we live in morally charged times where a breakdown in the American social contract exists, where we’ve moved to a system where low wages are supposed to be made bearable by low consumer prices and a hodgepodge of government assistance programs, the polarization of media has left many skeptical of new from mainstream sources, and the social media echo chamber is shaping what people see based on their interests.  In this era of political polarization, in which we are increasingly sheltered in neighborhoods, social networks and workplaces, corporate neutrality is now outdated.

Increasingly today, we are now seeing companies channel the energy and passion of people’s beliefs to fill a moral gap and stand up and speak out to the injustices we are seeing in the world. The development of millennials populating companies, their expectations of how they want to dedicate their lives and how they want to spend their time — they don’t want to check their values at the door and just adopt a culture of whatever the company is they happen to work at; they want to live those values in the company in some way. They’re expecting more of their leaders – not just to lead the economics of the company but also to really promote the values of the company internally and externally. When they see the values of the company being violated, such as equality and diversity, in the societies in which they operate, they have an expectation that those CEOs will step forward and represent their values in the community.

The good news is that many have accepted the challenge.  CEOs of WeWork, Dick’s Sporting Goods and PayPal are good examples – from banning meat as a company expense to limit the company’s environmental footprint to banning the sale of guns in the face of rampant school shootings to cancelling economic investment in states that have discriminatory policies.  Political polarization in the U.S. is pushing corporate leaders to enter into controversial political and social debates.  Businesses have an obligation, and their CEOs as a result, to be a force for good.

The old conventional wisdom about getting involved in controversial political issues, around social issues in particular was to stay in the middle.  That has changed and much of the CEO and corporate activism we witnessed over the last couple of years has come in response to latest U.S. Administration’s announcements. Leading CEOs issued reactive statements on everything from the immigration ban to public lands legislation to the transgender military ban to white supremacy to the decision to withdraw from the Paris agreement.

Moving from responsibility to action is a natural evolution of the CSR and ESG programs that are transforming companies across the world. Previous efforts were identified as marketing-driven and corporate driven initiatives. Brand activism is emerging as a values-driven agenda for companies that care about the future of society and the planet’s health.

The underlying force for progress is a sense of justice and fairness for all. The role of corporate activism in society as a whole will only become more relevant. In a time where we face a deep and increasingly intractable tragedy of the commons in infrastructure, intellectual capital, and investment flows, corporate activism can be an important change agent. However, companies and their leaders would be wise to remember that values matter most when they are least convenient, and that the perception of convenience or inauthenticity can greatly undermine the engendering of consumer goodwill.

Here are 6 practical tips that I believe help companies better map to a goldmine vs a minefield:

Politics and business have historically been like oil and water.  In the past, companies kept them separated largely out of fear that saying the wrong thing could cost a fortune.  Now, times have changed, and customers are looking for companies that stay up-to-date on what’s happening in the world, they are looking for companies that understand what is ada compliance.  All stakeholders today want their dollars to go to businesses they believe in, companies will have to get used to taking a stand and, more importantly, knowing when to do so.

From School to the Streets